Farrington Hall and Rajah Lodge – Aldrich, Alabama
Rajah Lodge – Aldrich. Torn down in 1947 after years of being dismantled and decline.
Davis Falls near Aldrich. Early Alabama College yearbooks frequently show photos of students at the falls. Apparently it was a popular place for supervised outings.
A picture of Falling Rock, between Pea Ridge and Dogwood a few miles west of Montevallo, from the 1912 AGTI yearbook, The Chiaroscuro.
AGTI students at Davis Falls, 1914. 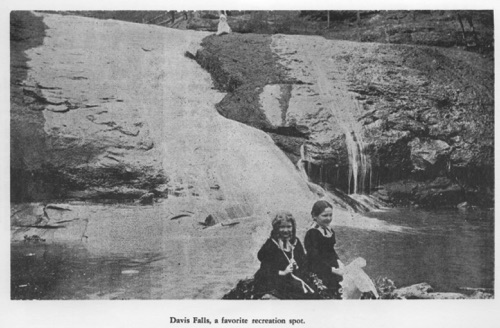 Davis Falls. This creek eventually forms the Alabama College Lake and merges with Shoal Creek just south of the Montevallo City hall.
Kroell House "The Owl's Cove"
Main Street. Torn down in the 1960's. Site of UM on Main today.
St. George Hotel, constructed in 1897 and torn down in the 1960's. Same site as Trustmark Bank today.
President Palmer's impressive home on the Alabama College campus. Workers preparing the site for the east wing expansion of Main Dorm. Palmer's house burned in 1921and was replaced by the house at Flower Hill in 1926.
Steel Girders crossing Shoal Creek in 1929 intended for Palmer Hall, under construction.
Reynolds, later Rogan, House at corner of Main and Middle Streets.
George Kroell Dry Goods Store.
Located on Main Street across from present TrustMark Bank.
The Kroell family burial plot in the Montevallo City Cemetery. Photo from 2015. 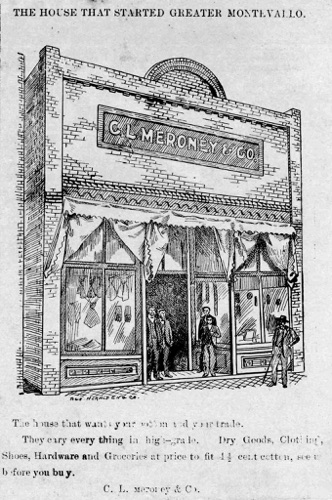 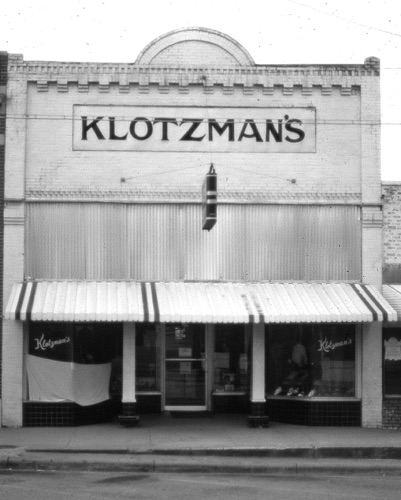 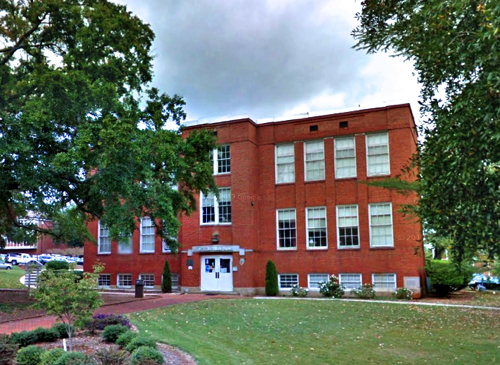 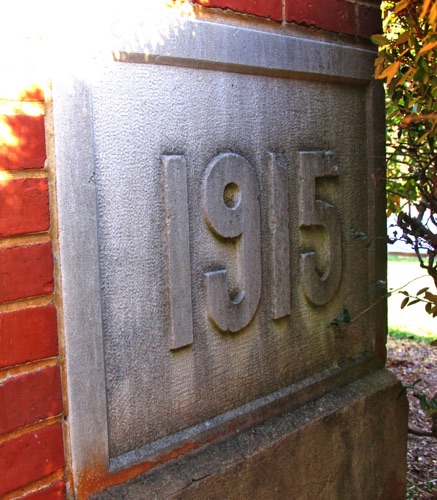 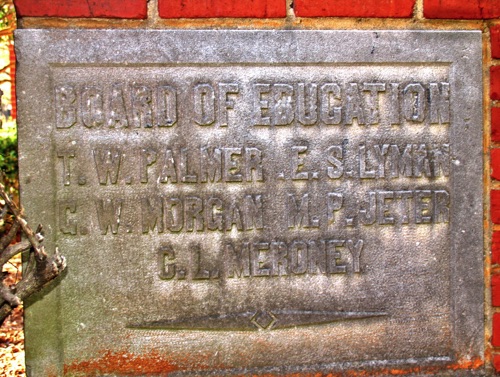 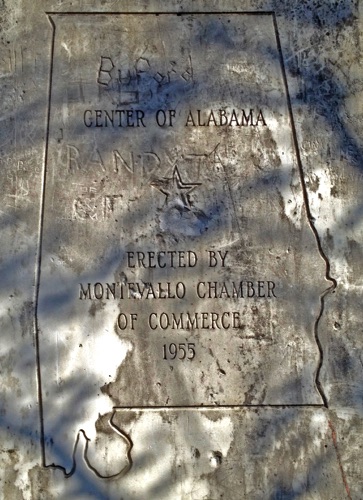 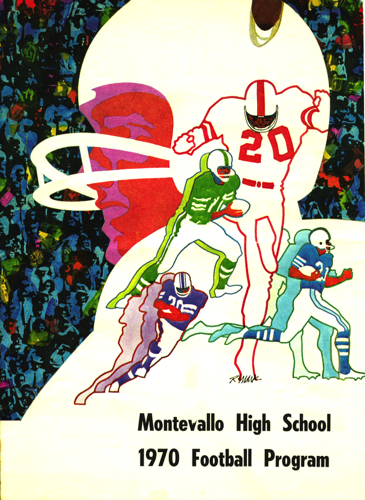 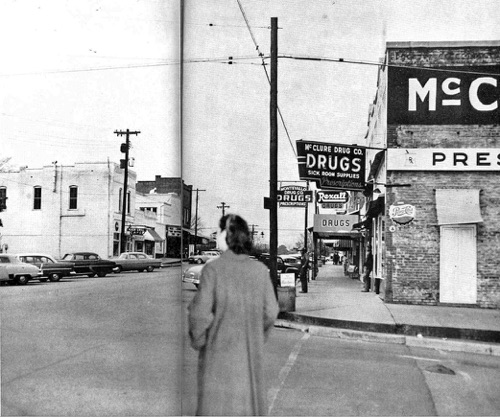 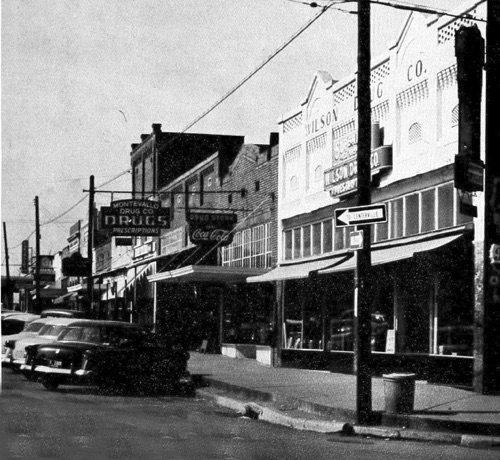 Main street, 1954. Wilson, later McClure, Drugs and Montevallo Drugs were next door neighbors for years until a fire forced Montevallo Drugs to move into the new Whaley Shopping Center in the early 1960's.
Clayton O. Nordan standing in the curve of Main Street looking south, near the location of Eclipse Coffee House today. The photo was shot to chronicle the cutting of the large trees on Main Street. Several tall stumps can be see at left. The first house on the left was the home of W.M. Wyatt. The house next door was the "Crowe" house that became the first location of Hoffman/Rockco Funeral Home.
Main street 1960 at the time the large trees lining Main Street were cut down to make room for street widening. Rogan house at left, Reid house in middle, Baptist Church at right.
Police block off Middle Street for clean-up of tree tops as the large trees downtown were removed for street widening, 1960. Rogan house at left, Alabama Hotel and Cafe was next door.
Clayton O. Nordan on Main Street, 1960. Stump of a recently cut tree can be seen over his left shoulder. at right, Masonic building, which housed Times Printing. Next to it is the Western Auto building. 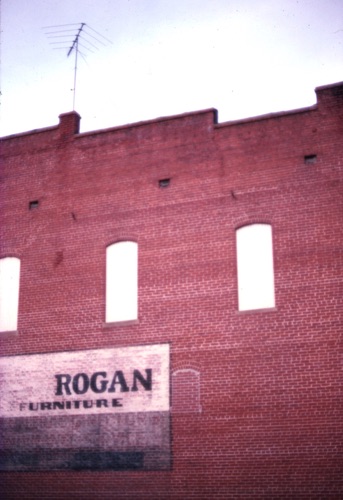 Rogan Furniture at the corner of Main and Shelby Streets. Close scrutiny of the sign reveals the words "Funeral Director and Ambulance Service." Rogan was one of the town's undertakers for many years.

Strand Theatre on Main Street. The double doors to the right of the ticket window was the "Colored" entrance. Black moviegoers would enter the doors and buy their tickets through an interior ticket window served by a single ticket seller, usually Mrs. Watson, and then ascend the stairs to the segregated balcony to see the show. Whites sat on the main floor. 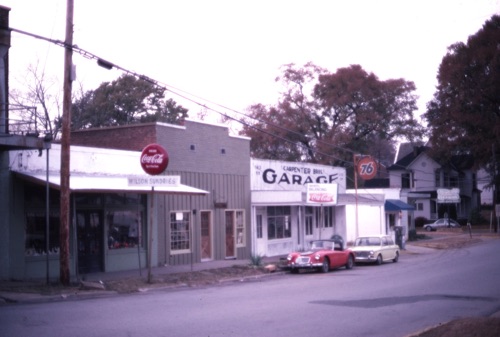 Middle Street behind McClure Drugs. Wilson Sundries was owned by Bloomer Wilson, the son of "Dr." P. C. Wilson who had owned Wilson Drugs. Bloomer was not a pharmacist, so he had a soda fountain and the tables and chairs that were formerly used in the drug store. He did very little business but supplemented his income by being the county rabies inspector. Further along can be seen Carpenter Bros. garage, Ottis Bean's barber shop, Montevallo Cleaners, and the stately former Givhan home. In 1972 it was the home of Glen and Doris Lein and their children.

A tile mosaic that remains to this day in the entrance to the old Wilson Drug store. 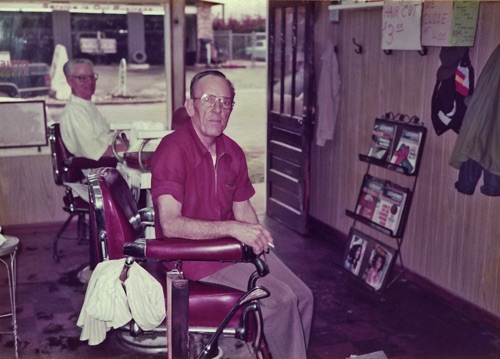 Ottis Bean (left) and Raymond Bearden in 1984 in their small barber shop on MIddle Street. The small boys' chair can be seen between the two adult chairs. 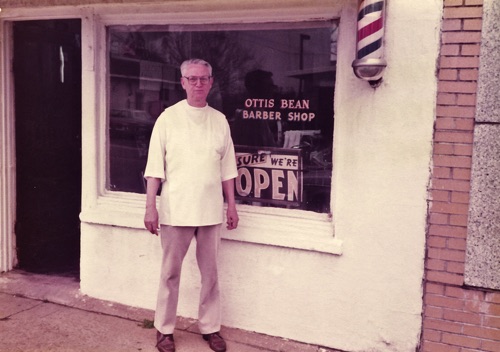 Ottis Bean in front of his barber shop in 1984. 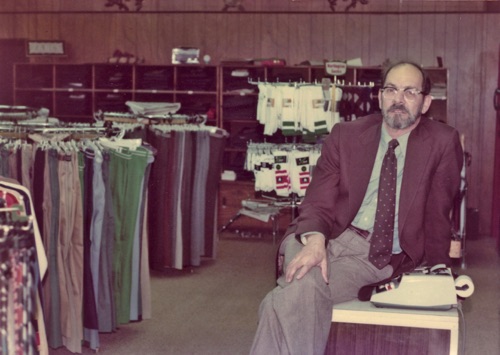 Montevallo native Zane Nathews in his men's store on Main Street in 1984. Zane opened his store in the Masonic temple building in the space formerly occupied by Times Printing Co. until they moved into their new space in the basement of the Whaley Shopping Center around 1960. 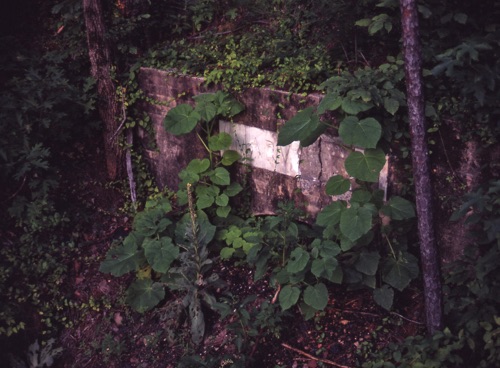 This photo was shot in1972 at the ruins of the Marvel coal mine on highway 10 in Marvel, AL west of Montevallo. The marble marker over the entrance to the mine read: MARVEL NO. 1., but had been vandalized or damaged by someone trying to remove it. 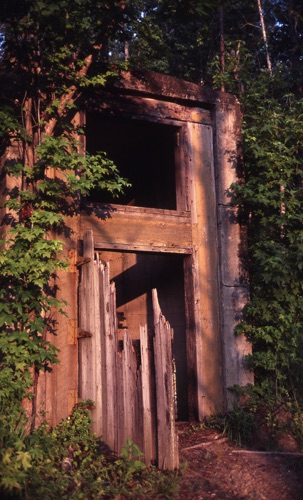 Another shot of the Marvel ruins in 1972. There is very little of this site left to inspect today. 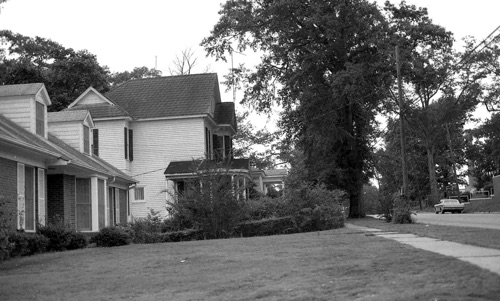 Looking west on Middle Street standing in front of the Methodist Church, 1972. The closest house on the left is the Methodist parsonage. The two story house is the old Peterson place. Charlotte Peterson, elementary school principal, lived in the house for many years.

Photo from 1972 showing sign for the former "Rainbow Market". This is the Barnes & Noble building today.

A view of Main Street from 1972 across from Sherman Holland Ford. The building on the right is the Barnes & Noble bookstore today.

Alabama Coach Company in 1972. The garage still housed several old buses, but Wyman Brown's business was nothing like it had been by this time.
Promotional photo publicizing a show of old Montevallo photos at the Parnell Library in 2010. The show was curated by local artist, Becky Bolton Criswell, who has strong ties to the Ebenezer community north of town. 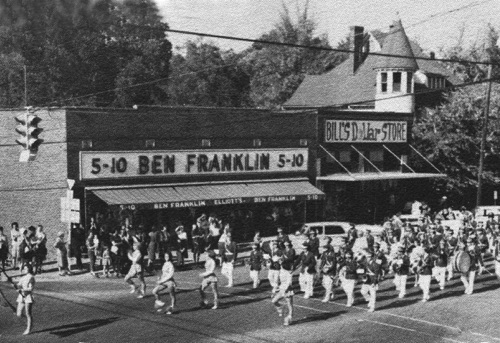 Montevallo High School band leads the Homecoming parade through the Main and Middle St. intersection in 1963. The Kroell house in the background was still standing when this photo was taken 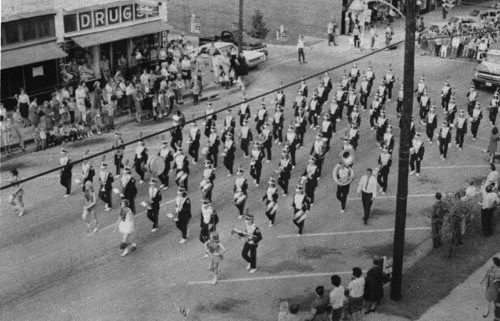 Montevallo High School band marches through town in the Homecoming parade in 1966. 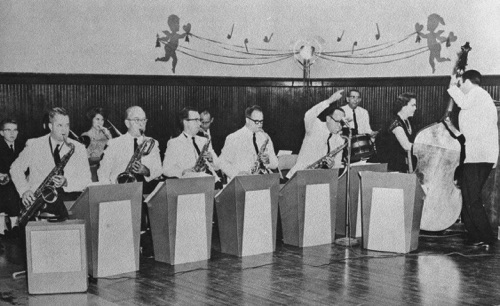 S.M. "Red" Mahan, local barber and father of Mike Mahan was known far and wide for his skills as a square dance caller. At the same dance at Montevallo High School in the mid-1960's, a country band played a set while the Kiwanians took a break. Red and the parents effectively took over the dance from the students with their big, festive square dance.

Or click on the thumbnail for a larger individual view.